Cerebral Palsy is the most common physical disability in childhood.

The brain that has not completed its development; occurs due to damage in the prenatal, perinatal or postnatal period.

Cerebral Palsy is not progressive. Significant improvements can be achieved with early intervention to the traumatized brain and lifelong rehabilitation.Premature birth, low birth weight, blood clotting problems, blood incompatibility between mother and baby, lack of oxygen during pregnancy or birth, brain hemorrhages, bacterial or viral infection of the mother during pregnancy that will affect the nervous system of the baby, the mother’s alcoholism during pregnancy Cerebral Palsy can be caused by smoking, using drugs and/or various drugs, psychological problems and blows to the abdomen. 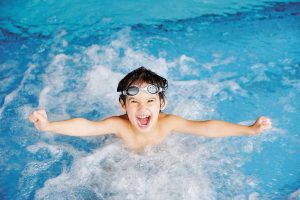 These are the Bad Ragaz Ring Method, which is based on the in-water application of PNF patterns, the Halliwick method, also known as swimming training, and the Watsu technique, which is used to increase flexibility, endurance and muscle strength in healthy people who are not used for treatment.Bad Ragaz

It is a technique applied in thermal water.

A temperature of 33-35 degrees is required. It is a technique used worldwide since 1930 for muscle reduction, strengthening, spinal traction, relaxation and tone inhibition. Applied in water at the therapist’s hip level with the therapist feet shoulder-width apart, hips and knees slightly flexed. Treatment time is 5 – 11 minutes. In order to protect the physiological effects of water, the therapist should stay in the water for a maximum of four hours a day.

This method, commonly known as swimming training, was developed by MC Millan in 1949.

It can be used in all age and disability groups. The method is based on encouraging the patient’s independence in water. It consists of four phases. It focuses on preparing the person for water, developing in-water balance, and controlling the head and breathing.

It started in 1980 with the application of Zen Shiatsu’s special flexibility-enhancing movements and patterns in hot water. It is used to increase the flexibility and respiratory capacity of healthy people, not for patients. Although it has been tried on skeletal system and neuromuscular diseases, it has not been successful.

In  recent years, in-water exercises have come to the fore as an alternative to the exercises performed on land.

14 children between the ages of 5 and 14, who did not have a history of surgery, botox, and had a good cognition with a history of CP, were included in the in-water exercise program, and 13 were used as the control group. At the end of 6 weeks, GMFM-88 was administered to all children. It has been observed that children who were included in an in-water exercise program showed a significant improvement.

A Study Designed on a Single Subject

GMFCS 3, a 5-year-old girl with spastic diplegic Cp, was a study. The patient uses a walker, bilateral AFO, and a stroller for long distances in the community. The patient has no history of surgery and has not received any treatment to improve his respiratory capacity.
The research was carried out in 3 stages as A1 stage, B stage and A2 stage. In the A1 phase, measurements were made once a week for 6 weeks without any intervention. Stage B is the intervention stage and is the stage where he does in-water exercises. Measurements were made at 13 and 19 weeks. The A2 stage is the follow-up stage after the therapies.

There was no joint limitation. Its body is hypotonic. The hamstrings and plantar flexors of the hip extensor abductors are spastic at a value of 1 according to the modified Ashword scale.
Before starting pool therapy, the child was evaluated once a week for 6 weeks. During this period, half an hour of physical therapy was applied twice a week. 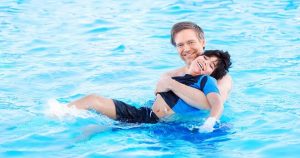 Treadmill walking, leg exercises, and stepping: The participant walked slowly on the treadmill at speeds ranging from 13.4 to 26.8m/min.While holding his hands, the therapist performed hip flexions and extensions in the water.

Aerobic exercises; 30-40 minutes the patient was run under the control of the therapist until the patient felt that could not run any further on the treadmill.
Shuttle run: Running after the toy duck in the pool or walking as fast as possible.
It was run with a game in the form of a running race against a family member on land against water resistance.The patient was encouraged to jump forward in the water as a racing game with the therapist.The patient was encouraged to run in shoulder-deep water.
The patient crawled in shoulder-deep water in a race against the therapist or family member.The patient kicked kickboards in shoulder-deep water.
Cooling down: Five min. Slow walking and stretching exercises.
Outcome (Effect of Pool Therapy on Balance in CP)Researchers namedThorpe and Reilly (2000) concluded that water is the safest environment for people with Cp and suggested that balance studies can be done in water.

They designed and implemented a study three times a week for ten weeks, with each session of 45 minutes.
Balance was measured with the TUG test in the results of the research conducted with 7 children aged between 7 and 13 years. In this test, children were asked to reach as high as they could in an upright position. Significant changes were found in the measurements made before and after the study.