Developmental Hip dysplasia, also known as congenital hip dislocation, is a general term used to describe certain abnormalities of the femur or acetabulum, or both, that are almost always diagnosed in the first two years of life and result in inadequate outcomes. Keeping the femoral head in the acetabulum increases the risk of joint dislocation, dislocation, or insufficient joint development. Joint bones are displaced in the joint, which causes the joint surfaces to separate.
There are two types of dislocations: typical and teratological.GCD occurs in approximately 1in 1000 live births. Dislocation is more common in girls and the left hip is affected more than the right. There’s also the possibility that the dislocation is bilateral. 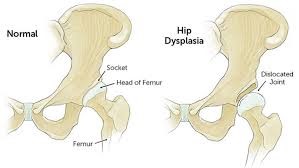 Hip dysplasia may also result from many structural abnormalities, such as shallow acetabulum, flat or irregular bonnet femoris, femoral or acetabular anteversion, and reduced perpendicular distance to the axis of the femoral head. Another risk factor is to swaddle the baby and use the crib board, which locks the hip joint in a “hijacked” position for a long time.Other risk factors are the first birth and breech birth.The incidence of KDH was found to be 10 times higher in newborns with anal malposition. In the breech position, the legs of the fetus are pressed into the uterus, which leads to hip dislocation if the ligaments are loose. The hood tends to be pushed out of the femoris acetabulum. A narrow uterus also facilitates hip joint dislocation during fetal development and delivery.

Despite the long history ofthis disorder and many experts dealing with this issue, there
is still very little information about the definitive etiopathogenesis of GDD.This is mainly due to genetic, mechanical, and environmental risk factors that define the multifactorial etiopathogenesis of GCD. The hip joint begins to develop physiologically from mesenchymal cells at the fifth or sixth gestational week. At 11 weeks, the femoral head is completely formed and will grow faster than the acetabular cartilage in the coming weeks, causing about 50% of the femoral cartilage to be found at birth, but in the postpartum period, the cartilage begins to develop much faster. If there is femoral head laxity after birth, Neonatal Hip Stability (NHI) can be diagnosed. This instability is usually present in the first few weeks of life, has a mild course, and resolves spontaneously in the eighth week of life in 88% of NHI cases.Permanent joint instability can be caused by reflex contraction disorder in soft tissues that fix the hip joint under physiological conditions until six months of age.After six months, spontaneous recovery is unlikely and the child needs intervention.

Permanent laxity of the capsule, subluxation and/or dislocation lead to progressive dysplastic changes, which may lead to lasting results, without treatment, especially in the case of permanent dysplasia up to adulthood. Permanent dysplasia over time causes changes in body position and gait. Reports of unilateral dysplasia are more severe than bilateral, as muscle strength in the affected limb is gradually affected. Over time, the limb is deformed, either from a reduction in cartilage or from other degenerative joint diseases, and therefore causes postural scoliosis, back pain, and gradual disability of the patient.

Pain in the hip area may also result from: Hip joint contusion, tension, athlete’s pubalgia, osteitis pubis, inflammatory arthritis, arthritis, arthritis, septic arthritis, Piriformis syndrome, adhesive hip syndrome, bursitis, avascular necrosis of the femoral head, fracture, dislocation, tumor, hernia, slipped femoral capital epiphysis, Legg-Calve-Perthes disease or pain reflected from the lumbosacral and sacroiliac regions. It is important to examine GKD atan early stage in the diagnosis process.This is not easy because there is no definite test or examination finding. The disorder is also painless, so the baby has no symptoms. Especially bilateral dislocations are difficult to detect. All newborns should be screened by physical examination. This examination includes an Ortolani or Barlow test.

Barlow Test:
This maneuver is usually performed to remove the hip from the acetabulum.The clinician looks for an unstable hip and tries to passively remove it.

Procedure: The child will be in the supine position and the examiner will passively bend the hip and knee up to 90 degrees.Raise the hips and bring the thighs to the midline. Then, the examiner will apply a slight pressure by holding his/her hand to his/her knee and applying force to the back. This will cause the hip, which is a sign that the test is considered positive, to come out of the acetabulum.

Ortolani test: This test is often used as a confirmatory test after the Barlow test to determine if the hip actually dislodges.

Procedure: The child will be in the supine position and the examiner will passively bend the hip and knee up to 90 degrees.Then the examiner holds his hand on the child’s knee, tries to shrink the hip by missing the hip and pushing the thigh forward. The test is considered positive with an audible clicking sound, which means that the hip is shrinking.

If the tests are positive, the baby should be referred to an orthopedist. If the test is negative, but no asymmetric skin folds are detected, or if the subluxation provocation test is positive, it is recommended that it be followed up by a pediatrician after two weeks. When he later finds a positive Ortolani test or Barlow test, it is recommended that the newborn be referred to an orthopedist.

If these tests are negative but the provocation test is positive, ultrasonography is recommended.In most cases, an ultrasonography will provide clarity about the disorder, but such testing is not recommended in all newborns. An ultrasound has proven to be more useful in describing anatomy until the cartilage is ossified. Sometimes an MRI is also used. CT scans or 3D CT scans are rarely used. Sonographic examination is another diagnostic procedure. The main disadvantage is that it can lead to excessive diagnosis, which can lead to excessive treatment. 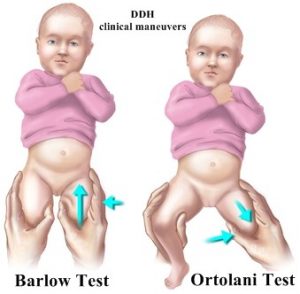 Other signs of hip dysplasia are asymmetric gluteal folds and a marked limb length inequality.

There is a difference in the treatment approach between neonatal cases and cases where the disorder is examined between 6 months and 6 years.If the dislocation is detected in the newborn screening, it is waited for 3 weeks before the intervention. Sometimes the hip becomes spontaneously stable. In this case, it is still important to re-examine the child at 5 or 6 months of age. On the other hand, if the hip is still unstable after three weeks, splinting in the reduced position at moderate abduction is recommended for at least six weeks or as long as instability persists. When splinting is required for a longer period of time, the risk of developing avascular necrosis at the femoral head will increase. There are three basic principles of treatment betweensix months and six years.First of all, to provide concentric reduction, secondly, to provide suitable conditions for continuous stability and normal development, and thirdly, to detect any failure in the normal development of the acetabulum and to regularly observe the hips to apply appropriate treatment when necessary.If possible, it is important to obtain reduction by non-surgical methods.Surgery is performed when other methods fail.Closed reduction is usually possible in infants up to eighteen months of age.When GKZ is later diagnosed, the chance of an operation being needed increases. Closed reduction is standard practice and the child will apply weight traction to the limbs either while hanging on a frame or on a gallows. Gradually traction is maintained to miss the hips, with a little more each day until an 80-degree abduction is achieved. This will take three to four weeks.

Another option for treatment is diet. Dietary supplements are often used. Oral glucosamine is derived from shellfish (though vegetarian options) and can help rebuild cartilage. An anti-inflammatory diet can help reduce inflammation. Ginger, garlic, green tea and Omega-3 fatty acids can have anti-inflammatory effects and can be found in flaxseed, zucchini, collard greens, hazelnuts, broccoli, cauliflower and spinach as well as fish and fish oil supplements. Some foods in the overnight family can increase inflammation. Tomatoes, potatoes, eggplants and red peppers are the most commonly eaten. In addition, anti-inflammatory drugs or NSAIDs can be used.Patients can also be given steroid injections to reduce inflammation and pain. However, some research has shown that repeated cortisone use weakens tendons and softens cartilage. 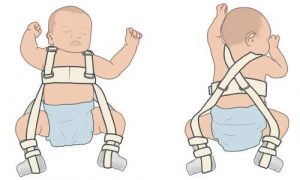 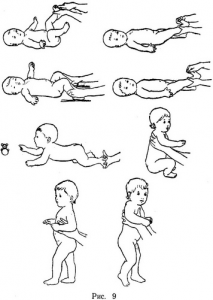 SURGICAL
Another surgical option is open reduction.This is used when a closed reduction cannot correct the joint. In open reduction, the surgeon cuts the hip capsule and repositions the femoral head. After the hip is sutured, a spica plaster is applied for 4 months or more to stabilize the hip. Treatment ofhip dysplasia depends on the age of the child. The purpose of the treatment is to bring the hip into the appropriate position. When the proper position is achieved, the doctor will keep the hip in that position and allow this body to adapt to the new position. The smaller the child, the better his/her capacity to adjust to the hip and the better his/her chances of full recovery.

When the child is less than 6 months old, a special corset called Pavlik harness is used.  The corset holds the baby’s hips in the correct position. Over time, the joint begins to form normally. Approximately 90% of newborns treated with Pavlik seat belts will fully recover. A Frejka Pillow is also used, but is not indicated in all forms of hip dysplasia.Complications occur mainly because the iliopsoas muscle layer pushes the circumflex artery towards the femoral neck and reduces blood flow to the femoral head.When the child is over 6 months old, the Pavlik harness may not be successful. In this case, the surgeon will place the hip in the appropriate position under anesthesia. When in this position, the child will be placed in a spica plaster. Spica casting is similar to the Pavlik harness but allows less movement.

Traction is anuncommon treatment.Traction consists of applying a force to stretch certain parts of the body in a certain direction. This will soften the tissue around the hood femoris and allow the hood femoris to move back within the acetabulum. The traction consists of rollers, ropes, weights and a metal frame attached to or on the bed. Traction is most commonly used for about 10 to 14 days. Ice application to painful areas helps relieve pain and reduces inflammation.

Regular, low or unimpact exercise such as swimming, water therapy or cycling, train force and range of motion. Strong muscles will act as shock absorbers and provide more support for the hip. For those who are overweight, weight loss can significantly reduce stress on the hip and reduce pain. Physical therapy can be used to increase the strength and flexibility around the joint to reduce pain. Physical therapy can also be used to teach the body to better align itself, which leads to reduced stress on the joint.
There is also another therapy called hypotherapy. Hippotherapy is a special therapy treatment strategy that uses the movement of a horse to influence the patient/client in various ways. Functional riding skills are not taught during hippotherapy; the client sits on horseback and physically adapts to the three-dimensional movements of the horse’s walk. Hypotherapy has been shown to motivate the child to participate in therapy, maintain the child’s willingness to participate, and provide a fun environment while facilitating painless movement.

• Correcting shortness and weaknesses in hip and knee circumference muscles