Obstetric brachial plexus paralysis (OBPP) is a clinical picture that develops due to injury to the C4, C5, C6, C7, C8 and T1  roots of the brachial plexus during birth, their trunks, their divisions, cords and branches. Various degrees of paralysis at different levels of the upper extremity and related secondary musculoskeletal system problems can be seen unilaterally or bilaterally. 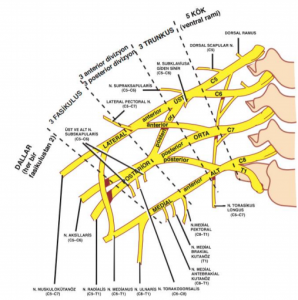 The incidence in the datain the literature draws a graph that decreases with the effect of antenatal care increasing over the years, on the other hand, especially due to the increase in maternal diabetes and maternal age; it partially increases due to the increase in its incidence in macrosomia over the years.
In the largest series evaluating 11 million live births in 2008, it was found to be 1.51 in 1000 births. In our country, the rate determined with 47,000 live births in 2002 is 0.9per 1000 births. 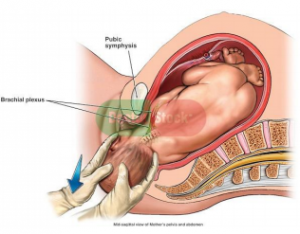 Root avulsion: It is the most serious lesion.
The nerve breaks off at the point where it connects to the spinal cord.Rupture: Damage is seen at a different level than the spinal cord level.

Tension: It is the most common lesion that indicates the degree of neuroflexia damage with the potential to heal within 3 months.

According to the anatomical location of the nerve damage, OBPP is classified in 4 groups as -upper turuncus (C5-C6), – middle turuncus (C7), – lower trunk (C8-T1) and – total plexus paralysis (C5-C8).

Upper Truncus
Injuries include C5-C6 roots. Sometimes C7 joins. It’s called erb paralysis. It is the group with the highest incidence. In the clinic, adduction in the shoulder, internal rotation, extension and pronation posture in the forearm are observed. If there is accompanying C7 nerve root involvement, flexion posture is observed in the wrist and fingers. This position is called the “tipping wait” posture.

Lower Trunkus
Injuries include C8-T1 roots. It’s a rare painting. It’s also called Klumpke’s palsy. A decrease in hand grip strength is observed in the clinic, but no proximal muscle weakness is observed. 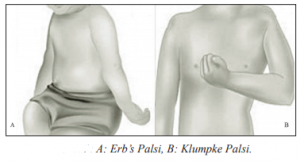 Total Plexus Paralysisis
The effect of nerve roots between C5-C8. The T1 root may also be involved in the injury. It is the most common type of injury after erb paralysis. In the clinic, an extremity with flask and sensory impairment is observed with claw hand deformity. This injury may be accompanied by Horner’s Syndrome.

Narakas examined OBPP in 4 groups in terms of clinical findings:

Type 1; C5-C6 refers to Erb paralysis with nerve root involvement. It covers approximately 46% of the cases. Its prognosis is good.

Type 2; C5-C6-C7 refers to large involvement erb paralysis with spinal nerve injuries. It covers 30% of the cases. Its prognosis is worse than Type 1. Al-Qattan et al. then divided the Type 2 group into two. If wrist extension against gravity is observed in the infant within the first 2 months, Type 2a is included in the Type 2b group if it
is observed after 2 months.

Type 3; is a complete paralysis group with spinal injuries between
C5 and T1.

Type 4; C5-T1 is the group with Horner Syndrome with spinal nerve injuries.

The affected side limb length is shorter and the circumference measurements of the hand are less on the affected side. Postural problems are seen in the body due to the unilaterality of the upper extremity effect. In OBPP, the center of gravity is displaced due to muscle atrophy and malformations of the bone structures on the affected side. Due to their limitations in motion, compensatory movements in which the body or other joints are used during functional activities support asymmetry.  Scapular dyskinesia is common in upper and middle trunk injuries. Scapular stabilization is impaired and the movement limit of the glenohumeral joint is reduced. Rhomboids are other findings that are frequently observed to weaken the middle and lower parts of the trapeze. These causes lead to spinal problems and scoliosis.
Muscle tissue changes are also seen in OBPP. As a result of the increase in connective tissue content and fat infiltration, denve muscle is swollen and hard-looking. In addition, it is difficult to reach the functional structure of the muscle due to the prolonged sarcomer size. Muscle maturation cannot be completed because the peripheral nerve connection is reduced or interrupted in OBPP. Muscles that do not receive enough conduction cannot develop as longitidunal. This means that the muscles are inclined to shorten and harden.Often, loss of sensory function is also seen. Proprioceptive sensory loss is observed in patients undergoing nerve repair or tendon transfer.

Evaluation should be performed with a multidisciplinary team in the earliest period afterbirth. Evaluation is started by taking a detailed birth story. Afterwards, the extremity of the infant can be examined in detail. NEH, muscle strengths, sensory evaluations and autonomic nervous system should be evaluated. Palpation is also an important evaluation method. It should include bilateral muscles and joints.
Motor functions can be evaluated by observing primitive reflexes. After the 6th month, primitive reflexes are replaced by correction and equilibrium reactions. For this reason, motor function evaluation should be made with purposeful movements.

Towel Test: The child is laid on his back. His face is covered with a towel or tissue. It is observed that he/she takes the towel with his/her affected and unaffected arm. With this test, information about shoulder elevation, external rotation, elbow flexion and extension, hand finger flexion are obtained.

Cookie Test: Evaluates elbow flexion from the 6th month. During the evaluation, the child is asked to eat the cookie given to his/her affected hand while in the sitting position. Meanwhile, the tester gently supports the upper arm so that it is in adduction. Thus, abduction (Trumpet sign) compensation is prevented with the observed internal rotation of the shoulder while taking the hand to the mouth in children with upper truncus damage. If the child can place the cookie in his mouth with a neck flexion of less than 45 degrees, the test will be successful.

Active Movement Scale is one of the standardized motor evaluation scales that is important for use inyoung babies (from birth) and can be used until adolescence. In this scale, each muscle group in the upper extremity is evaluated in positions where gravity is eliminated and against gravity. While gravity is eliminated, 0-4 points are evaluated and 5-7 points are evaluated against gravity. 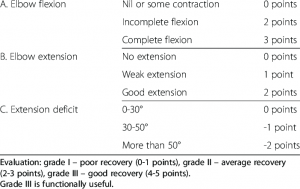 Since it requires the cooperation of thepatient, its use in OBPP involves difficulties (in older children).Each movement of the upper extremity is tested by giving resistance one by one.

This system evaluates the senses according to the child’s response to painful stimulus (stimulation with a needle) and touch.

Physiotherapy and Rehabilitation in OBPP

In individuals with OBPP, the main purpose of physiotherapy is to prevent muscle atrophies and gain function with joint stiffness, contractures. In this context, families are taught exercises that should be applied at home, tactile stimuli and exercises suitable for the normal motor development of the baby. Thus, families can repeat movements many times at home. In the early period, movements that provide sensory input (massage, contact with different materials, vibration, weight transfer, etc.) provide limb awareness. Since it is known that sensory integration paves the way for active movements, these movements must be taught to the family. These treatment programs continue until complete recovery or adulthood and periodically require control and revision by healthcare professionals. Passive joint movements for shoulder, elbow, wrist and finger joints should be started immediately after the immobilization process. However, if there is evidence of fracture accompanying OBPP, the program starts 3-4 weeks after birth.

Immobilization is required for 2 weeks in patients diagnosed immediately after birth. In the first week, the arm should not be kept sagging in order to prevent tension on the nerve. The arm should be kept slightly on the side and the elbow slightly bent.

– Positions should be shown to the family. The arm should not sag and should be positioned on the chest. Shoulder flexion and abduction exceeding 90 should be avoided. Extension exceeding 45 degrees and internal rotation are inconvenient.
-The treatment program should include joint range of motion (JMO) exercises to prevent contractures and deformities in the joint in the first stage. The family should be taught passive joint movements inside all joints. The movements should be done slowly and waited for 5 seconds at the end of the movement. It can be done 3-4 times a day with 10 repetitions.
– Sensory input is very important in the early period. The family can be taught classic massage. In addition, weighting, crawling and tactile stimulation with different materials can be applied on the arms in the prone position. 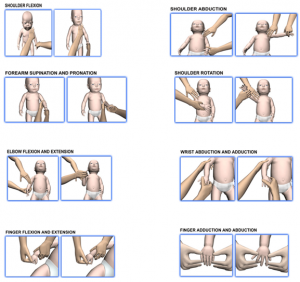 After the 4th month,the baby’s extremity should be kept within the visual field as much as possible.Afferent stimulation can be performed in the arm with tens. When the appropriate age is reached, functional stimulation of the extremity can be provided in front of the mirror. Kinesio taping, which has insufficient evidence of its effect onmotor performance, provides proprioceptive stimulation. 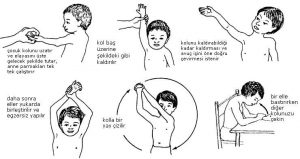 OBPP is recommended to prevent contractures and help movement. For shoulder internal rotation contractures, classical brachial plexus orthosis is often recommended, supporting the shoulder in external rotation and abduction, elbow in flexion, forearm in supination and wrist in neutral position. In the elbow joint, static elbow extension orthoses are recommended to correct elbow flexion contractures, dynamic elbow flexion and extension orthoses to assist movement, and wrist rest orthoses produced from neoprene for the wrist.Activity Based Exercises Along with movements to all muscles and joints of thearm, movements including both arms, scapula and arm movements in the lateral and prone position, head control, forearms and motor development such as standing, sitting, crawling on the hands and activities that increase active participation. Restrictive forced movement treatment can also be applied. 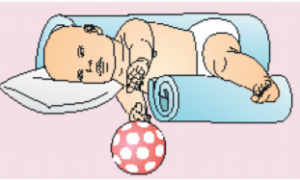 Tilt the baby’s affected arm to the side so that it is the highest. Place one more large, curled towel on the child’s back and in front of him. Put toys in front of them to stimulate the activity of the affected upper arm. This position makes it easier to reach, as your baby does not need to lift his arm against gravity. 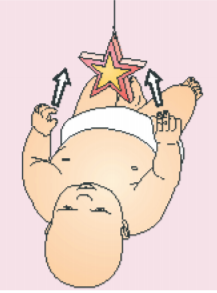 LYING IN A SUPINE POSITION

Put your baby on the floor, and then suspend a toy or hold it on it. Encourage them to reach up, especially with the affected arm. From time to time, you may need to gently hold the unaffected handle. This promotes the acquisition of skills.

LYING IN A PRONE POSITION 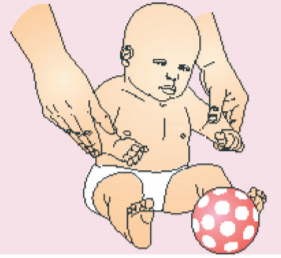 While sitting briefly in an inclined position, put your hands on your baby’s arm or elbows and help them with a two-handed activity, such as reaching for a toy or clapping. This promotes coordination between the unaffected and dec affected arms.