Thromboangiitis obliterans, or Buerger’s disease, is a segmental occlusive inflammatory condition of the arteries and veins characterized by thrombosis and recanalization of the affected vessels. It is a non-atherosclerotic inflammatory disease that affects small and medium-sized arteries and veins of the upper and lower extremities. The typical age range for its occurrence is from 20 to 50 years, and the disorder is more common in men who smoke .Migrating superficial phlebitis can be found in 16% of patients and indicates a systemic inflammatory response.

Firstly patients present with claudication of the feet, legs, arms, or hands, which may be mistaken for joint or neuromuscular problems. result of the disease progression leads to ischemic resting pain and ulcerations of the toes, feet, or fingers.

The disease is found worldwide, prevalence among all patients with peripheral arterial disease, 0.5 to 5.6% in Western Europe, 45 to 63 percent in India, 16 to 66% in Korea and Japan, and 80% among Ashkenazi Jews It varies up to . The etiology of thromboangiitis obliterans is unknown, but tobacco use or exposure is central to the onset and progression of the disease. If the patient smokes, stopping completely is an important first step in treatment.

The etiology of Buerger’s disease is unknown. Although TAO is a type of vasculitis, it is different from other vasculitides. Pathologically, the thrombus in TAO is highly cellular, with much less intense cellular activity in the wall of the blood vessel and a preserved internal elastic lamina. In addition, TAO differs from many other types of vasculitis in that the usual immunological markers — elevation of acute phase reactants such as erythrocyte sedimentation rate (ESR) and C-reactive protein (CRP), circulating immune complexes, and autoantibodies such as antinuclear antibody, rheumatoid factor and complement levels are often is normal or negative.

Tobacco exposure is necessary for the onset and progression of the disease. The mechanism of the disease is not fully understood, but may include enhanced cellular sensitivity to type-I and type-III collagen, impaired endothelium-dependent vasorelaxation, and immunologic dysfunction associated with increased anti-endothelial cell antibody titers, and tobacco hypersensitivity. 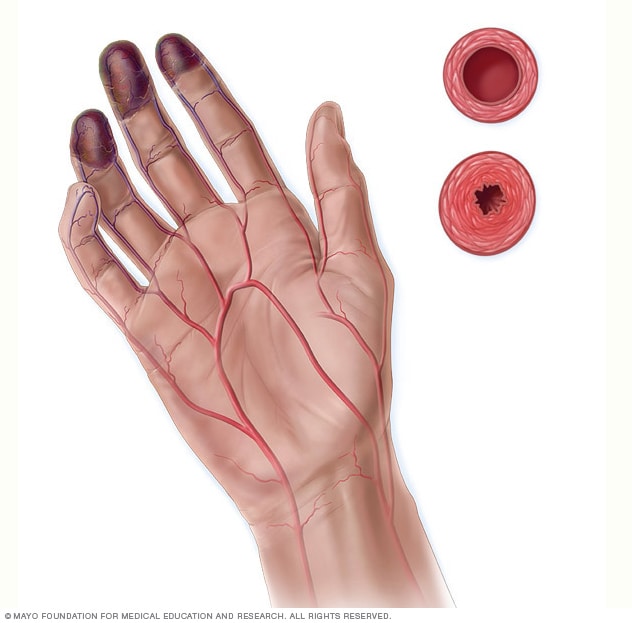 Buerger’s disease begins by causing your arteries to swell and blood clots to form in your blood vessels. This restricts normal blood flow and prevents blood from fully circulating through your tissues. This causes tissue death because the tissues starve from nutrients and oxygen. The pain usually starts in the extremities but can spread to other parts of the body. Patients may experience numbness and tingling in the limbs as well as Raynaud’s Phenomenon.

Buerger’s disease usually begins with pain in the affected areas, followed by weakness.

Despite the severity of ischemia (lack of blood flow) in the distal extremities that occurs in Buerger’s disease, the disease does not involve other organs, unlike many other forms of vasculitis. Even if ulcer and kangrene in extremities evolve, organs such as lung, kidneys, brain and gastrointestinal system (GI) are not affected. The reasons for this condition are unknown. 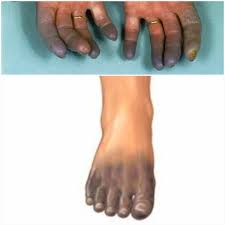 The most effective treatment for Buerger’s disease is to quit smoking. Therefore, it is important that patients with a diagnosis of Buerger’s disease immediately and completely stop smoking in order to prevent the progression of the disease and prevent amputation. Early treatment is also important because Buerger’s disease can cause social problems that affect the quality of life. Even smoking one or two cigarettes a day or using smokeless tobacco (chewing tobacco or using nicotine-containing patches) can keep the disease active. If there is no gangrene when the patient stops smoking, amputation is avoided. Patients who continue to smoke are at risk of having their fingers and toes amputated. Doctors should repeatedly educate and counsel their patients about the importance of stopping the use of all tobacco products.

Despite the very strong correlation between smoking cessation and reduction of clinical manifestations of TAO, patients may continue to experience claudication or Raynaud’s phenomenon after complete cessation of tobacco use.
Despite the clear role of inflammation in the pathogenesis of TAO, the true benefit of anti-inflammatory agents such as steroids has not been demonstrated.
Supportive care should be aimed at maximizing blood flow to the affected limb. Care should be taken to avoid thermal, chemical or mechanical injury and fungal infection. Vasoconstriction caused by exposure to cold or drugs should be avoided.
In patients with TAO, arterial revascularization is usually not possible due to extensive segmental involvement and the distal nature of the disease. The benefit of bypass surgery to the distal arteries is also controversial due to the high incidence of graft failure. However, if the patient has severe ischemia and has a distal target vessel, bypass surgery with the use of an autologous vein should be considered.

These exercises are special exercises aimed at improving circulation in the feet and legs. These exercises can be performed in order to stimulate the collateral blood circulation of patients with peripheral circulatory disorders. The lower limbs are raised to an angle of 45 to 90 degrees and supported in this position until the skin turns white (looks dead white). The feet and legs are then lowered below the level of the rest of the body until redness appears (it should be noted that there is no pressure against the back of the knees); Finally, the legs are placed flat on the bed for a few minutes. The duration for each position varies depending on the patient’s tolerance and the rate at which the discoloration occurs. Usually exercises are prescribed so that the legs are raised for 2 to 3 minutes, down for 5 to 10 minutes, and then straightened on the bed for 10 minutes. 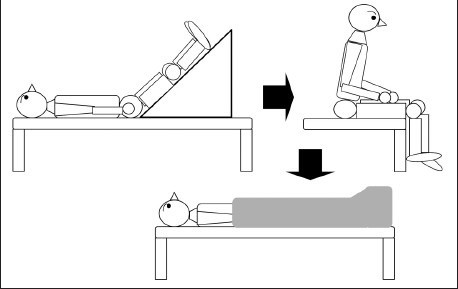 1) The patient is laid with the lower extremity supported at 45 degrees of flexion. Wait 0.5-3 minutes until the extremities turn white.
2) The patient is seated comfortably with his legs hanging down. In this position, dorsiflexion-plantar flexion, inversion-eversion of the ankle is required. Wait 1-3 minutes until the extremity color returns to its original state.
3) Keep the legs warm with a blanket and lie down on a flat surface for 5 minutes.

Performing all three of these exercises sequentially means 1 session, and the daily session varies according to the patient’s condition. 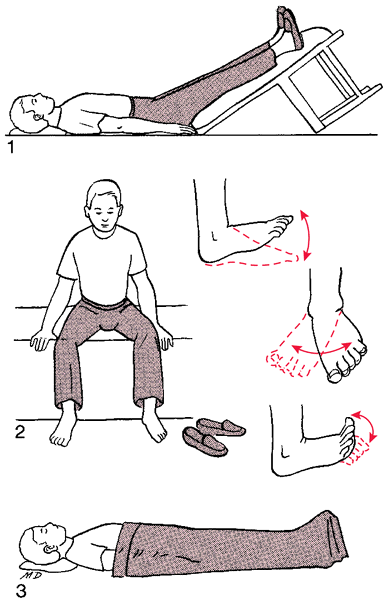