Pediatric rehabilitation is a team approach to disability or disability caused by physical, mental, sensory-perception or cognitive disorders that may occur due to prenatal, birth or postnatal reasons.

Cerebral palsy can be defined as a non-progressive, permanent disorder in the posture and movement system that causes limitations in functional activities; This picture may be accompanied by sensory, perception and communication problems, epilepsy and musculoskeletal system problems. Physiotherapy approaches within rehabilitation practices, normalize sensory and motor experiences, ensure proper posture and independent functional activity, try to regulate muscle tone, improve visual and auditory reactions, support normal motor development and provide motor control, increase the quality of existing movement, improve walking, It aims to prevent soft tissue, joint and posture disorders, to support orthopedic and surgical interventions, and ultimately to prepare the child for youth and adult periods. Determining realistic goals and priorities, informing the family and ensuring their active participation in the physiotherapy program will increase the success of physiotherapy.

A variety of approaches and techniques are used in the rehabilitation of children with cerebral palsy (CP), ranging from traditional techniques such as muscle strengthening, stretching, and massage to more complex motor learning-based theories such as neurodevelopmental therapy. The motor disorders seen in CP are often accompanied by sensory, cognition, communication, perception and/or behavioral disorders; thus, therapy approaches are tailored to meet the individual needs of the child.

Some of the most common situations are:

1-In children with cerebral palsy (spastic), the muscles that always stay in the same position due to contraction shorten over time. As a result, the range of motion of the joint cannot be completed. In the later stages of the treatment, when active movement occurs due to the development of the brain, the child cannot perform the desired movement because of the structural defect.

2-To increase the functional capacity of the child. Children with cerebral palsy must complete the functions in their developmental stages in order to gain independence in daily life. These functions are: head control, forearm rest, hands-on, turning, crawling, sitting, crawling, kneeling, standing and walking.

One of the defining physical features of cerebral palsy is that the muscles are abnormally stiff, rigid, or tight, which is spasticity. Spasticity reduces the child’s ability to control muscle movements, particularly in the hips, knees, ankles, shoulders, elbows, and wrists. Spasticity can also cause exaggerated reflexes, making movements appear erratic or strained.

HOW IS CEREBRAL PALSY CLASSIFIED?

Cerebral palsy is classified according to the Gross Motor Function Classification System (GMFCS). The World Health Organization (WHO) and the Cerebral Palsy Surveillance in Europe developed GMFCS as a universal standard for determining the physical abilities of people with CP. The system focuses on:

The five levels of GMFCS:

Level 1 cerebral palsy
Level 1 CP is characterized by the ability to walk without limitations.

Level 2 cerebral palsy
A person with Level 2 CP can walk long distances without limitations, but cannot run or jump. They may need assistive devices such as leg and arm supports when they are first learning to walk. They may also need to use a wheelchair to get around outside their home.

Llevel 3 cerebral palsy
A person with level 3 CP can sit with little support and stand without support. They need hand-held assistive devices such as a walker or cane when walking indoors. They also need a wheelchair to move around outside the house.

Level 4 cerebral palsy
A person with level 4 CP can walk with the use of assistive devices. They can move independently in a wheelchair and need some support while sitting.

Level 5 cerebral palsy
A person with level 5 CP needs support to maintain head and neck position.
They need support to sit and stand and can control a motorized wheelchair.

THINGS TO DO IN THE REHABILITATION PROCESS

Spasticity: It is called resistance to passive movement. Spasticity increases when the child wants to move. Spastic CP is the most common type of CP affecting approx. It causes stiffening of the muscles and exaggerated reflexes, making it difficult to walk. Many people with spastic CP have gait abnormalities, such as bending their knees or making scissor-like movements with their legs when walking. Muscle weakness and paralysis may also be present in people. Symptoms may affect the entire body or only one side of the body.

Dystonia: contractions in the form of a twisting tube or rotation.

Ataxia: coordination and balance disorder. Ataxic CP is the least common type of CP. Ataxic CP is characterized by voluntary muscle movements that often appear erratic, clumsy, or jerky. People with this form of CP often have problems with balance and coordination. They may have difficulty walking and performing fine motor functions such as grasping and writing objects.

Hypotonia: the child does not have contractions, on the contrary, the child has a jelly-like consistency. Hypotonic CP causes decreased muscle tone and excessively relaxed muscles. The arms and legs move very easily and look limp like a rag doll. Babies with this type of CP have little control over their heads and may have difficulty breathing. As they get older, they may have trouble sitting upright because of their weakened muscles. There may also be speech difficulties, weak reflexes, and gait abnormalities.

People with CP may have other problems such as: 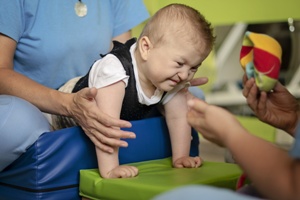 This method is used in rehabilitation before and after spasticity surgery. The main problem in a child with cerebral palsy (spastic) is damage to the brain. It is not possible to treat this damage with current treatment systems. What is done in the treatment of these children is to make use of the shape-shifting feature of the brain to ensure that the damaged areas take over the healthy areas. This is achieved by learning the function of damaged areas by healthy areas. Learning should be from easy to difficult. It has been accepted that rehabilitation in water is effective. Here, the lifting power of the water helps the movements that the child cannot do, and the child makes the movements easier. In this way, the child makes the movements frequently, allowing the brain to learn. When the child accelerates the movements, this time the water provides resistance and strengthens the structure.

Cerebral palsy rehabilitation with facilitated exercises also has features close to the benefit mechanism of exercises performed in water.

In this method, body exercises are done first. The reason for this is that the arms, legs and head connected to the strong body will be able to move more controlled and more comfortably. Secondly, it is the strengthening of the weak places in the arms and legs determined as a result of the evaluation. Third, functional exercises are performed.

Body exercises can be worked on the bobath ball.

Exercise of arms and legs:

Exercise elastics can be used when training weak areas in the arms and legs. When starting the movement, the exercise elastics are tied to the child in a way that they will be taut in both directions. The resistance of one of the attached exercise elastics should be one degree higher than the other. Advantages of working in this way:

These devices help manage spasticity, keep the limbs in the correct position, and prevent the unusual alignment of bones and joints from becoming permanent.
There are a variety of splints and other devices a doctor can provide. Physiotherapists work one-on-one with children to choose the most effective option and help them get used to it. Some devices are designed to be used when a child is awake and in motion, while other types of devices may be specifically designed to gently stretch the tendons while a child is asleep.