Van der knaap disease is a rare leukoencephalopathy with macrocephaly and cystic degeneration of white matter. The presence of subcortical cysts in the frontal and temporal lobes is a characteristic finding . In Van der knaap disease, mild motor development retardation and epileptic  seizures are observed in addition to early-onset macrocephaly. Problems that may be encountered in late period findings are  psychomotor retardation, spasticity, dystonia, choreathetosis and cerebellar ataxia. Van der Knaap disease is a rare disease and its prevalence has been reported to be less than 1 in 1,000,000. Effective systemic studies have not been conducted to determine the incidence worldwide. Very few cases have been reported in theneonatal period.

This disease typically manifests itself in affected children with a history of delayed motor milestones. MRI findings including leukodystrophy and subcortical cysts are distinguishing features of the disease and in most cases give a diagnostic clue. Several cases of Van der Knaap disease with classic features have been reported in the literature.

Van der knaap disease is considered to be autosomal recessive because it is more common in individuals born with consanguineous marriages and there are more than one sick child in the same family.The diagnosis is made with MRI and clinical findings. In addition to the fact that the underlying pathology of the disease is not known precisely, studies have reported that the disease occurs as a result of mutations of the gene called MLC1, which encodes membrane proteins on the 22q chromosome.

2 phenotypes are observed, classical(MLC1, MLC2A) and good course(MLC2B). Classic phenotype features include delayed gait, slow deterioration of motor functions with cerebellar ataxia and mild spasticity, revival of deep tendon reflexes, dysarthria, seizures, behavioral problems, temporary increase in symptoms with minor head trauma, macrocephaly that may be persistent in the well-rounded phenotype or turn into normocephalus, improvement in motor functions after the first year of life ( clumsiness and hypotonia may continue), and cerebellar white matter is generally observed to have a normal signal in brain MRI.

Macrocephaly, a characteristic feature of this disease, typically occurs at birth or develops within the first year. Epilepsy usually develops in all patients and in the first years of life. Seizures may be partial or general. They are usually controlled by drugs and uncontrolled epilepsy is unusual. Although mental retardation and cognitive decline have been reported to be mild, late progression may occur. These are the characteristics of the classical phenotype. The other developing phenotype follows an improved clinical course following a similar initial presentation, in which motor function improves or normalizes.

Canavan disease, Alexander disease, glutaric aciduria, GM1 and GM2 gangliosidosis, which are characterized by megalencephaly and volume increase in white matter in the differential diagnosis, should be examined carefully. The most important difference of van der knaap disease from these diseases is that psychomotor destruction is much slower despite severe white matter involvement.

She gave birth by emergency cesarean section due to meconium aspiration syndrome and stayed in the neonatal intensive care unit for 18 days.

Intrauterine growth retardation was found at the 30th week of pregnancy and growth at birth was shown to be consistent with the 32nd week of pregnancy. Deep tendon reflexes were evident in both lower extremities. In 1 year old electroencephalography, moderate epileptic findings were observed in the left hemisphere central regions and treatment was started from Luminalet.

In the MRI findings, a more prominent cystic change was observed in the temporal regions.The findings were reported to be compatible with Van der Knaap disease.
Bilateral moderate sensorineural hearing loss was detected at the age of 1. Behavioral responses to 65-70 dB speech sounds were observed.

According to the evaluation of gross motor development stages, he performed prone head control at 6 months, supine head control at 9 months, independent sitting at 13 months, crawling at 18 months and independent walking at 30 months. Multilevel Botulinum Toxin (Botox) was applied to the bilateral lower extremities at the age of 3. At the age of 4, a second Botox application was applied only to the bilateral gastrocnemius muscles.

He started the physiotherapy program at 12 months of age and continued for 36 months 3 days a week according to the Neurodevelopmental Therapy (NDT) approach.Each treatment session lasted 60 minutes. The home program provided to the family has been checked and updated within the last 15 minutes.

The treatment program applied is shown in Table 1. 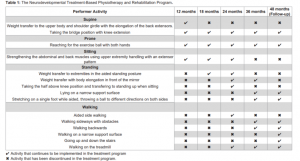 In the supine position
* Transferring weight to the upper body and shoulder girdle with elongation of the back extensors. (12 months)
* Taking the bridge position with knee extension. (12-48 monthsand more) 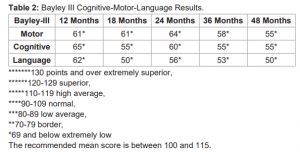 The cognitive, motor and language development of our case was “extremely low” at some level. Bayley III scores well below his peers. GMFM scores gradually increased with age. The change in GMFM scores over time is shown in Figure 1. 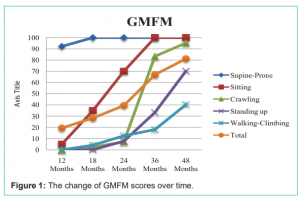 Bilateral hip flexor, adductor, hamstring and gastrocnemius muscle tone values are shown in Table 4. Tonus was normal at 12 months, but increased with age.

In our case, the total GMFM scores we used to evaluate gross motor function increased with age and physiotherapy. However, it is not known whether this increase is related to physiotherapy or growth and development.
Although there was an improvement in cognitive and motor development according to the Bayley-III assessment, motor and cognitive retardation became more pronounced with growth. As time progressed, the Bayley-III motor, language and cognitive scores of our case were included in the very low average. As the necessary cognitive, language and motor skills become difficult with growth, we believe that the child will not be able to catch up with his peers about neurodevelopmental development.
As a result, the gross motor function of our case increased with NDT-based physiotherapy, but cognitive, language and motor development skills were behind their peers.